Life is fragile. More often than not, you don’t know what to expect the next moment. When you know the clock is ticking towards the end, you don’t know how to react. You are at a loss for words. It may be the last few months of your near and dear ones, struck by cancer and it is end stage. You just have to bide your time and pray that let the last moments be as pleasant and as fulfilling as possible.

Karunashraya set up in 1994 in Varthur near Marathahalli, is a 73-bedded hospital (including one for paediatric cancer) for terminally ill cancer patients, set up by Karnataka Cancer Society and Rotary Bangalore Indiranagar. It is free of cost for patients irrespective of financial status. No money is accepted from patients’ families for in-patients’ treatment.

Says Karunashraya Medical Director Dr Nagesh Simha, the guiding force of palliative care is to cure something, to relieve often, to comfort always. The word palliative came from the Latin word pallium, meaning to cloak or cover. To envelope the person with compassion. About 25 per cent of the patients who come to Karunashraya do not know their condition. Palliative care is not terminal care and especially of those near the end of life. It aims to improve the quality of life of patients, their families and their care givers.

Describing palliative care, Dr Simha said it is the active holistic care of individuals across all ages with serious health-related suffering due to severe illness. Palliative care is not only terminal care but should be started at a much earlier time including at the time of diagnosis and should continue till the last breath.

At hospice, the In-patient section has six wards, each ward has 12 beds.

Sangeetha Murugan, the nursing head at Karunashraya says eight out of 12 patients in a ward are bedridden and the biggest complication is bed sore. “We see to it that no one suffers from bed sore and a strict treatment protocol is maintained. These patients have low immunity. The nursing staff develop an attachment to some of the patients, especially those staying for months. Patients share their life stories to the nurses and many are moving stories. They wait for the nurses to come and talk to them. While some patients who come here meet their end soon, there are patients who live for months together.

Karunashraya, a dream project of its Chairman Kishore Rao, and along with Dr Nagesh Simha, has tended to over 26,000 patients over the years and has five doctors and 80 nursing and nursing aide staff, working in shifts. It has its own pharmacy, stocking all required medicines. The pharmacy follows strict protocols while dealing with the medicines. Often, they get donations in kind, but hospital has to follow government norms and hence has to buy all its medicines and administer as per doctors’ instructions only. The doctors are palliative care experts.

In the words of Kishore S Rao, Founder-Managing Trustee of Karunashraya, it all began with him reading about the work of Indian Cancer Society (set up in 1951) whose work at Mumbai under the guidance of Dr D J Jussawala, one of the biggest surgical oncologists and Director of the Tata Memorial Centre, had opened his eyes, as described in the book on Karunashraya.

Inspired by the dedication shown by Dr Jussawala and his staff, Kishore wanted to start a branch in Bangalore. Thus started the work on educating the poor about early detection and treatment. The government noticed sustained good work done by Kishore and his team and thus invited them to serve on the governing council of Kidwai Memorial Hospital.

Making the rounds at Kidwai made Kishore realise the trauma of the patients and their families, mostly rural and urban poor. While doctors and nurses were doing a magnificent job in treating patients, there came a time when they had to tell the patient’s families there is nothing more they can do.

Watching the plight of patients and their families when they were told there is nothing more the doctors could do, was a nightmare. They did not understand the significance of this sentence. They were told they could go home! These were people who apparently had nobody to speak to, and more sadly no one to look after them. At one time, they had medical and paramedical care and suddenly, they stared at the prospect of having no doctor, no nurse, no ward-person to assist them in their increased suffering.

They were being abandoned and being unwanted by the world and often even by their own families.

Kishore who had met with Dr Nagesh (a Rotary Bangalore Indiranagar member since 1983) decided to set up Karunashraya, a Hospice, and thus came into being a centre that cares for those who are in their very last stages in life.

The first donation of Rs 10 lakh came from Tata Trusts, when Kishore met with Russi Lala, then Executive Director of some of the Tata Trusts including Sir Darobji Tata Trust. The Tata Trusts were generous and supportive and until 2014, had given Rs 4.06 crore. The second biggest support came from Rotary Bangalore Indiranagar of about Rs 1.41 crore during the same period, and contributed to the equipment for the hospital. This was in addition to the continuous backing provided in the hard-core management of the hospice.

Karunashraya Institute for Palliative Care Education and Research (KIPCER) also provides training in palliative care for medical and non-medical professionals. Nursing care aid training is provided to young girls with socio-economic background and also provide all of them jobs. There is difficulty in retaining them as they have ambitions. The six-month courses are offered free of cost and so far 32 batches of 10 to 12 students each have been trained and offered jobs.

Through the Bagchi Foundation, and a few other donors, a research institute has been set up in the campus. Regular seminars and training programmes are held for all staff, and also cultural activities are held to boost morale of patients and nursing staff at Karunashraya. There is a nursing hostel for housing the staff.

The hospice is built in such a way that when the end comes, other patients will not come to know, and there is an exit door for each such patient from where they are wheeled out. There is also a prayer room for patients’ families to spend some time before being taken for last rites.

Karunashraya is supported and run by Rotary Bangalore Indiranagar and Karnataka Cancer Society. Karunashraya which requires approx. Rs 7 crore per annum arranges for funding on its own. CIPLA and AT&T are currently sponsoring to some extent. HANS Foundation, Delhi sponsored for six years, but currently they dropped out to support some other cause. RBI provides considerable sponsorship towards operational expenses, and always covers the gap in funding as and when required. Rotary Bangalore Indiranagar arranges for sponsors, and is on the Board of Karunashraya.

Karunashraya is building its second project at Bubaneshwar with huge support from Subrato Bagchi and funds are being raised for the Hospice. 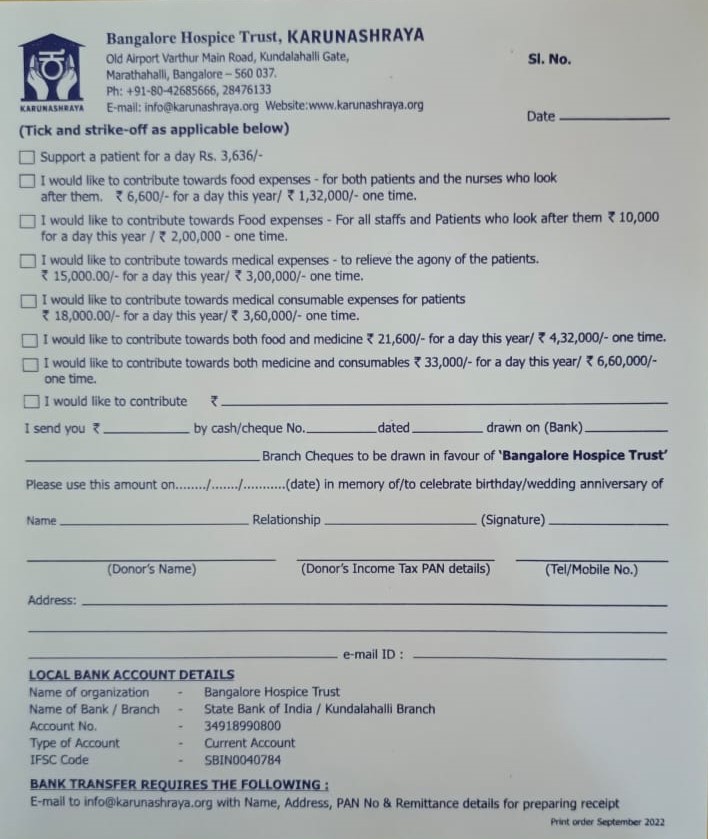 If you want to sponsor and contribute, please write to [email protected] 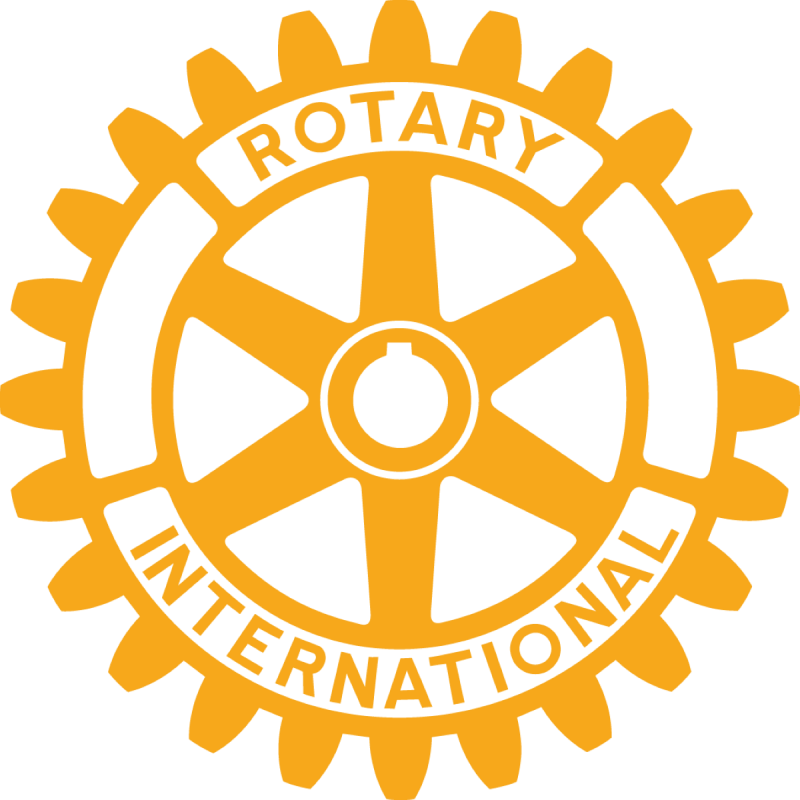 Every month since I joined Rotary, I’ve looked forward to reading this magazine, especially the opening essay from our Rotary president. I’ll admit that as much as I appreciate a digital copy, I still revel in the tactile sensation of sitting down and leafing through the magazine’s glossy pages. They are a treasure trove of photos and memorable stories about our great organization — the one we all know and love. I have learned so much over the years about service projects and the lives that each of you have transformed.

As a communications professional, I have longed for the day our stories would be a regular part of mainstream media and our flagship magazine might populate doctor’s offices, coffee shops, or anywhere else people sit, wait, and browse. It’s great that Rotary members are better informed about all we do — and wouldn’t it be that much better if more people knew our stories?

All this was top of mind as I thought about our plans for promoting Rotary worldwide during the upcoming year. Over the next 12 months, we are going to shine a light on projects that put Rotary service on display to the world, and we are going to do it strategically. Nick and I will focus on some of the most impactful, sustainable, and scalable Rotary projects from our areas of focus, in what we call the Imagine Impact Tour.

We are inviting top-tier journalists, thought leaders, and influencers to use their channels to help us raise awareness by reaching people who want to serve but have not yet realized they can do it through Rotary.

But there was another important issue to consider — our carbon footprint. I take seriously Rotary’s emerging leadership position on environmental issues. The example set by our members during the COVID-19 pandemic is fundamental to how we carve out our future.

That means we will harness digital technology to tell our stories — we will be tweeting, posting, and “going live” to anyone who will listen. We must consider the environment, and part of that means not always traveling but continuing to connect in meaningful ways as we have for the past two years.

Of course, we are social people, and we still need to be together. We simply need to be more mindful of our decisions and think about how we gather just a little bit differently. For example, if we travel to visit a project, we will plan successive visits in neighboring areas.

So, what are your stories and who can help tell them? I hope you might consider your own Imagine Impact efforts — your story might be something you can promote just as easily on social media or during a Zoom call. Think about ways to showcase notable projects in your clubs and districts.

We all feel the impact that Rotary service and values have on us. Now it’s our opportunity to share that feeling with others.

“We are going to shine a light on projects that put Rotary service on display to the world, and we are going to do it strategically.”